NASA Named the Orbit for the Station around Moon 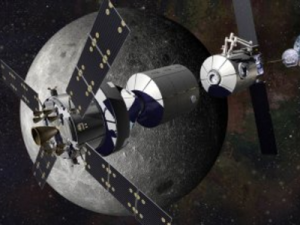 OREANDA-NEWS. Specialists from the National Aerospace Agency of the United States of America as well as their colleagues from the European Space Agency have chosen the orbit where the international visited lunar station 'Gateway' will be located.

It is assumed that the first components of the space station, which will appear in the orbit of the moon, will be delivered into space in 2022.

The result of the work of scientists was "almost straight halo orbit", the center of which will be a natural satellite of our planet. The orbit implies the movement of the station around the moon along an elongated trajectory - the minimum distance between the station and the moon will be three thousand kilometers, and the maximum - seventy thousand. A full turn will take about seven days.

The orbit will allow almost all the time to keep in sight both Earth and the back side of the satellite. At the same time, space station solar panels will receive maximum energy.