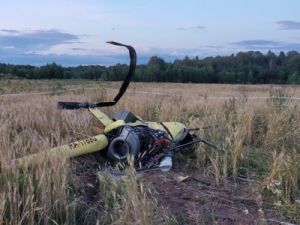 OREANDA-NEWS Oleg Chernigov, as well as the deceased head of the Federation of ultralight aviation Igor Nikitin, prepared the President for the flight with cranes in 2011.

In the crash of the Robinson helicopter near Solnechnogorsk killed both pilots on Board. Before it became known that one of the pilots was the head of the Federation of ultralight aviation Igor Nikitin, who was preparing for Putin to fly with cranes in 2011, teaching management managertable.

The second victim in the hard landing of the helicopter Robinson in the suburbs was a pilot Oleg Chernigov. This was reported by RBC in the Federation of ultralight aircraft. The organization noted that the victim previously also taught the President of Russia Vladimir Putin to fly montelupone with cranes, Siberian cranes.

The helicopter made a hard landing on July 14 near Solnechnogorsk in the Moscow region. As a result, two people were killed.