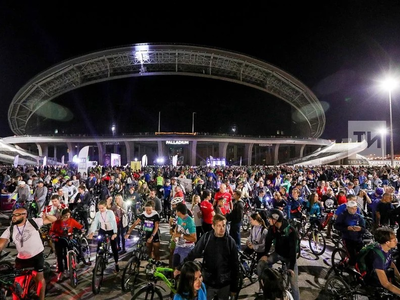 Physical activitySportPhysical culture and recreation
OREANDA-NEWS About 5 thousand residents and guests of the capital of Tatarstan took part in the Night Cycle Fest held on the night from Saturday to Sunday. This was announced on a business Monday at the Kazan City Hall by the Director of the City Tourism Development Committee Daria Sannikova.

“Bicycle fest was dedicated to the upcoming WorldSkills World Championship. The walk united not only Kazan's different cycling communities, but also guests from neighboring cities. In total, 5 thousand people took part in the event,” the speaker noted.

Athletes and amateurs drove around the river port and railway station, past museums and restaurants, through parks and city squares. The length of the cycle fest route this year was 29 kilometers.
Source: OREANDA-NEWS
Другие новости: