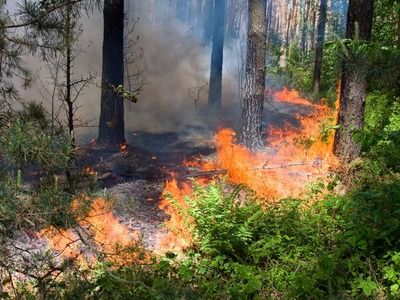 The Area of Forest Fires in the Russian Federation was Halved

OREANDA-NEWS According to the Aviation Forest Protection Agency, as of Friday morning, August 23, there are more than 130 forest fires on the territory of Russia on an area of ​​almost 44 thousand hectares, according to which active fire fighting was carried out. A day earlier, the area covered by fire was 102.1 thousand hectares.

Such a decrease in the area of ​​fires was facilitated by rainy weather, some of the fires were put out by the Aviation Protection forces, TASS reports. Now 1.4 thousand people, 80 units of ground equipment are involved in the elimination of fires. Monitoring of natural fires is conducted by 39 aircraft, another 18 are involved in extinguishing the fire, reports TASS.

Currently, the largest number of forest fires is active in the Krasnoyarsk Territory (98 fires on an area of ​​23.4 thousand hectares). Only three fires were recorded in Chukotka, but their area is 11.5 thousand hectares. Summer also burns in Transbaikalia, Yakutia, Kamchatka, in the Irkutsk, Murmansk and Magadan regions, in Buryatia, Bashkortostan, Yamal and Ugra.