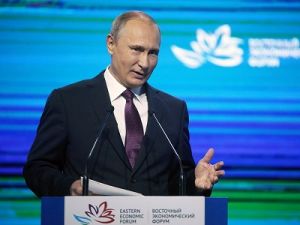 OREANDA-NEWS Russian President Vladimir Putin intends to instruct the government to develop a National Program for the Development of the Far East until 2025. He said this at the plenary session of the IV Eastern economic forum.

The head of state also stressed that the program should be formed with a view to 2035. "The scale of the tasks facing us requires systematic work for decades to come. I think that we need a National Program for the Development of the Far East of Russia for the period up to 2025 with the prospect until 2035, " Putin said.

"The government will be instructed to prepare such a document, to do this in close contact with the Far Eastern regions, citizens, business, public and business associations," he noted.

Putin said that a center for international cooperation and integration should be established in the Far East. According to him, it will be a powerful resource for achieving the strategic goals of development and strengthening the competitiveness of the country, as well as improving the quality of life of citizens. "I am convinced that the new role of the Far East as the locomotive of the domestic economy and commodity culture in the coming year will be recruited," the President said.

In addition, the head of state called for an increase in the rate of economic growth in the Far East to 6% per year, which exceeds the global average. He noted that this task is not easy, including due to strong competition, so its implementation requires effective work. "Our neighbors in the Asia-Pacific region show good growth rates. This means that we should demonstrate about 6% per year in the Far East," Putin said.

At the same time, the President instructed the management of major Russian companies, including Rosneft, Gazprom, Rosatom and Roscosmos, to place their engineering and research centers on Russky island in Vladivostok, which should become a major world-class scientific and educational platform.

The IV Eastern Economic Forum is held in Vladivostok on September 11-13. Earlier at the plenary session of the forum, the President noted that 122 thousand people had already received the "Far Eastern hectare".