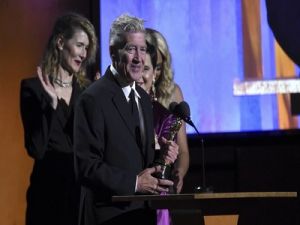 OREANDA-NEWS. Director David Lynch received an honorary Academy Award on Sunday for his outstanding contribution to the cinema (Academy Honorary Award). This is stated in a statement by the American Academy of Motion Picture Arts, posted on Twitter. The ceremony takes place at the Hollywood and Highland Center in Los Angeles.

Together with Lynch, the Italian director Lina Wertmüller and the American actor Wes Stuydi received honorary awards. Reward them. Gina Hersholt, awarded for her outstanding contribution to the cause of humanism, received actress Gina Davis. “This is a Hollywood party in the best sense of the word”, said Academy President David Rubin at the presentation ceremony.

Unlike other awards of the American Academy of Motion Picture Arts, laureates of honorary awards for outstanding contributions to cinema are determined not by all its members, but in a narrower circle by the board of governors of the organization. Initially, such awards were presented during the main Oscars. However, then a special evening was allocated for them, which was designed to emphasize the importance of these awards.