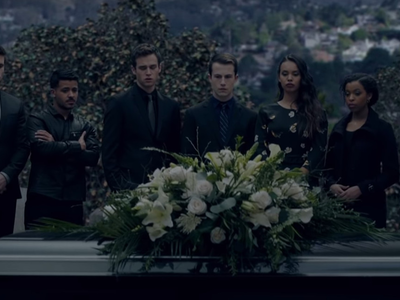 Trailer for the Third Season “13 Reasons Why” is Released

Culture and leisureFilm industryArt
OREANDA-NEWS Streaming service Netflix has published a trailer for the third season of the series "13 Reasons Why." The creators of the show also revealed its release date - all episodes will be available to users on August 23.

The plot of the new series will revolve around the murder of one of the high school students of Liberty High. The authors decided to move away from the tragic story of Hannah Baker: the performer of the role of the girl Katherine Langford left the series after the second season.

This time, teenagers will have to gather at the tomb of the mysterious murdered Bruce Walker (played by 25-year-old Justin Prentis, "Preacher", "I'm a Zombie"). Type extremely unpleasant. So to deprive the youth of his life "anyone could."

Netflix decided to edit the suicide scene of the protagonist from the finale of the first season, “13 Reasons Why.” According to the company, despite the fact that the series prompted many young people to start talking about issues such as depression and suicide, as well as get the necessary help, the authors decided to correct the controversial episode on the advice of medical experts.