Russia to Give Files on Reconstruction of Syria's Palmyra to UNESCO 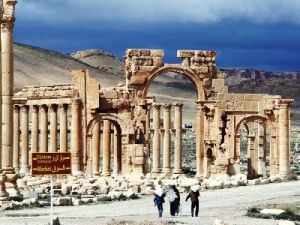 OREANDA-NEWS. Russia will hand over materials regarding reconstruction of Syria’s Palmyra to UNESCO, and among them there will be a 3D model of the city, Russian Defense Minister commented.

Russia is going to forward files on reconstruction of Syria's Palmyra to UNESCO. Sergey Shoigu, Defense Minister of Russia, in an interview with Russian media stressed that among the materials there will be a specially created 3D model of the city. An album with archival images will also be prepared. According to Sergey Shoigu, all the materials will be given to UNESCO in the next two months.

The minister also recalled that some time ago, UNESCO itself spoke of the need to find sources of funding for the restoration of Palmyra.

“When we appealed to them ‘Let’s start, it’s high time’ - all kinds of movements started meddling, not entirely scientific, not quite cultural and not at all geographic. Here I want to shout out loud, “Hullo, guys, where are you? You were the ones weeping and saying that Palmyra must be restored”, Russian media quote Shoigu.

The minister said that now the staff of the RGO (Russian Geographical Society, where he is the president) are combing through archival materials about the ancient city and is finishing the 3D model of Palmyra.

“We found photographs of Palmyra of 1872, taken by first Russian travelers who arrived there. Now we will make an album in which we want to show what was there in Palmyra and what has been done. This is necessary in order to understand what to do next and how. For this, we are also making a 3D model <…> so that UNESCO could assess the volume of restoration performed,” Sergey Shoigu added.

Syria’s Palmyra is included in UNESCO’s list of world cultural heritage sites. A number of monuments were destroyed there while militants were controlling Palmyra in May 2015 - March 2016 and December 2016 - March 2017.