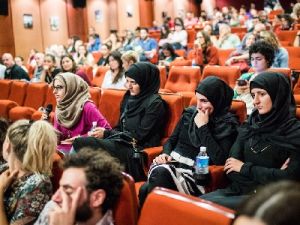 OREANDA-NEWS Russian film week opens on Wednesday in the Lebanese capital Beirut showing Danila Kozlovsky's film "Coach". Demonstration of the picture created for last year's world Cup in Moscow, will be held in the capital's hall Grand Cinemas, located on the territory of a large shopping complex ABC on Verdun street.

"We brought the best domestic films to Lebanon, which received the highest ratings of Russian viewers and held the first places in the film distribution," Marina Komova, the project Manager. According to this information, the film festival will be an important cultural event within the framework of the business forum, which is held these days in Beirut by the Russian-Lebanese business Council together with the international Association of Islamic business.

The film screening will take place not only in Beirut, but also in the second largest city - Tripoli. In this Northern capital of the country for viewing allocated cinemas in the cultural center of Safadi and the resort town of Enfe.

"The films will be shown in Russian with Arabic subtitles, which will allow not only Russian - speaking viewers, but also people of all ages from all Lebanese denominations to get acquainted with the novelties of the national cinema," Komova said.

Among the selected films  for the show, the project Manager called "T-34" Alexei Sidorov,"Big" Valery Todorovsky,"The Spacewalker" Dmitry Kiselev, "Attraction" Fyodor Bondarchuk, the сomedy "I Am Losing Weight"  Aleksey Nuzhny  and the cartoon "How Not to Rescue a Princess"  Sergei Glezin.

A fascinating journey into nature, geography, history, Ethnography and culture of Russia will be the screening of the documentary "Russia from the train window" by the famous photographer and Director Anton Lange. At meetings with the audience in Tripoli and Beirut, the author himself will present his work, which became, according to critics, a blitz portrait of Russia of the XXI century.