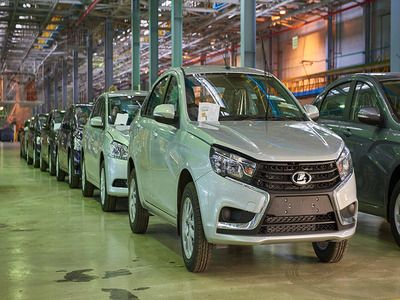 IndustryCars and equipment manufactureCar and truck transportInternational activities
OREANDA-NEWS. AvtoVAZ will suspend car production from April 29, it is planned to resume it on May 18, Sergei Zaitsev, chairman of the enterprise’s primary trade union organization, told the Russian media on Monday.

“Car production will be stopped from April 29”, Zaitsev said. It is planned to resume production on May 18. A source at AvtoVAZ confirmed to the Russian media that car production would be suspended within these deadlines, specifying that office workers would work until April 30.

Earlier it was reported that AvtoVAZ's sales against the backdrop of the crisis are almost at zero, with costs of about 2 billion rubles a week. The company expects that it will be possible to increase demand with the help of concessional lending programs “First Car” and “Family Car” for 2020 and prolongation of their validity. Also, to stimulate sales, it's necessary to apply public procurement.

In addition, the company previously stated that it plans to switch to a four-day work week from June 29 amid negative forecasts for sales in the Russian car market. AvtoVAZ is the largest passenger car manufacturer in Russia, part of the Renault-Nissan-Mitsubishi alliance.
Source: OREANDA-NEWS
Материалы по теме:

The Head of Roscosmos Called the Struggle of Russian Capitalists for the Tesla Plant AmusingOreanda.ru | 28.05.2021 10:50:20