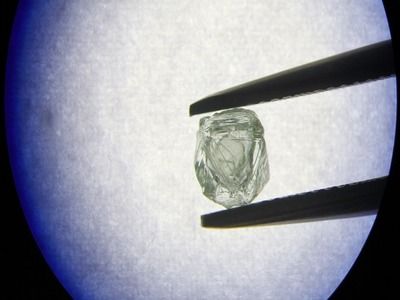 IndustryNon-fueled minerals extractionEventsState finance
OREANDA-NEWS. At one of the deposits in Yakutia, ALROSA specialists found a unique diamond matryoshka in which smaller diamond freely moves. “As far as we know, such diamonds haven't been encountered in the history of world diamond mining yet. This is truly a unique creation of nature, especially since nature doesn't like emptiness”, said Oleg Kovalchuk, ALROSA Deputy Director for Innovation, whose words are quoted in the company's message.

The “external” diamond is small (weight 0.62 carats, maximum dimensions 4.8 × 4.9 × 2.8 mm), and the crystal moving along its inner cavity is even smaller (1.9 × 2.1 × 0.6 mm, the estimated mass is 0.02 carats). According to ALROSA experts, it was the inner diamond that formed the first, while the outer one formed around it later. How exactly it happened that instead of a single crystal a binary system of two stones formed is still unclear.

“There are two main hypotheses: according to the first version, during the growth the diamond was captured by the mantle mineral, which was later dissolved under the Earth’s surface, according to the second - as a result of ultra-fast growth, a layer of porous polycrystalline diamond substance was formed inside the diamond, which was subsequently dissolved more aggressive mantle processes”, Kovalchuk explained.

According to Kovalchuk, the structure is unique, since the cavities usually formed in crystals are filled with other minerals. The cost of a unique diamond and its further fate is not called. In early August 2018, ALROSA sold the largest Russian diamond from the Dynasty collection. It's a colorless round stone weighing 51.38 carats in color D (colorless), purity VVS1 (without inclusions). According to the company, this is the cleanest of large diamonds cut “in the entire history of Russian jewelry”.
Source: OREANDA-NEWS
Другие новости: