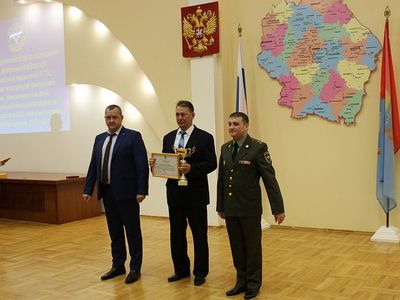 OREANDA-NEWS. IDGC of Centre - Tambovenergo division took the first place among companies of the Tambov region in terms of organization of work in the field of civil defense, prevention and liquidation of emergencies, ensuring fire safety and safety of people at water bodies. This decision was made by the administration of the Tambov region based on the results of activities of the regional territorial subsystem of the Unified State System for Preventing and Eliminating Emergency Situations for 2017.

At the final training and methodological gathering of the top management of the Civil Defense and Emergencies Centre under the leadership of Deputy Head of the administration of the Tambov region Oleg Ivanov, it was noted that according to the results of 2017, Tambovenergo demonstrated high performance in the implementation of the plan of the main activities in the field of civil defense and emergencies. During the solemn award ceremony, which was held in the administration of the Tambov region as part of the gathering, Tambovenergo’s team was awarded a first-degree diploma and a rolling cup. The head of the department of mobilization training and civil defense of the branch Alexander Martynenko was awarded with a letter of thanks from the head of the regional administration

"Tambovenergo successfully implemented the Plan of the main events in the field of civil defense and emergencies during the year. The tasks for training the branch’s employees for the activities in this sphere have been fulfilled in full," stressed Deputy General Director of IDGC of Centre - Tambovenergo division director Vladimir Syschikov.