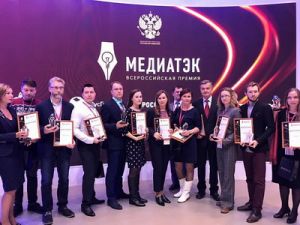 OREANDA-NEWS. The project of the Belgorod branch of IDGC of Centre for prevention of electric injuries among children and adolescents "ABC of electrical safety", as well as the project of IDGC of Centre and Volga Region "Comprehensive electrical safety lessons with the "Electric patrol" team became winners of the third All-Russian competition "MediaTEK-2017" in the category "Safe energy". The first place in the nomination "Promotion of professions of the fuel and energy sector" was also awarded to the branch of IDGC of Centre and Volga Region - Kirovenergo together with the Kirov representative office of PJSC "T Plus". Honorary awards for the first places were given to representatives of power companies within the framework of the business program of the international forum "Russian Energy Week".

The "ABC of electrical safety", created by Belgorod power engineers of IDGC of Centre, is a set of printed and video materials intended for conducting lessons, social actions and other activities aimed at promoting electrical safety among children and adolescents. Poems, colouring books, crosswords, puzzles, animated films describe dangerous situations that can arise in a person’s life, and offer the right solutions for getting out of them. The set is implemented on the principle of "You learned - consolidate!" and touches on the most problematic situations associated with electricity. The idea, concept and content are the author’s development of employees of IDGC of Centre – Belgorodenergo division. All materials are distributed free of charge for classes in schools, kindergartens, libraries, when working with difficult adolescents in departments for minors of the Ministry of Internal Affairs of the Russian Federation in the Belgorod region and other institutions of the region.

The project-winner of the Kirov branch of IDGC of Centre and Volga Region "Energy Night" has been implemented since 2016. The event is part of the All-Russian action "Night of Museums" on the site of the Museum of History of Energy and Electrification of the Kirov region. For visitors of "Energy Night" several excursions to this closed branch museum are organized, where everyone can get acquainted with the history of the Vyatka region energy sector, see unique exhibits. Simultaneously with the excursions in the halls of the museum, educational and recreational activities for children and adults on the topic of energy and prevention of electric injury are organized. More than 1,500 people took part in the project "Energy Night-2017". And in 2017 the number of guests who came to the event, compared with 2016, is four times more.