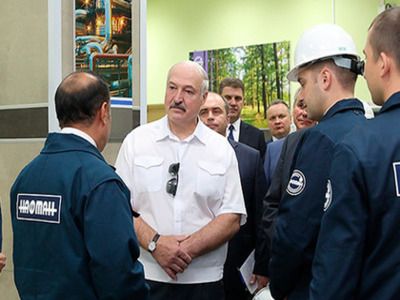 Lukashenko Refused to Crawl on His Knees in Front of Russia

Fuel and energyOilInterstate relationsInternational activities
OREANDA-NEWS. President of Belarus Alexander Lukashenko was displeased with the fact that Minsk may receive compensation of only $ 20 million due to pollution of the Druzhba oil pipeline, while Russia's international partners demand up to $ 800 million from it. The Belarusian leader quotes the Belarusian media. “But we suffered the most. And we are told: well, that there, Belarusians, - they have not lost anything. How? Therefore, we must watch out and see why they, for example, pay $ 800 million in damage, and we suffered the most, $ 20 million”, said the President of Belarus during a visit to the Naftan refinery.

The largest oil collapse in the entire history of Russia occurred at the end of April, it was then that Russia's partners began to declare a sharp deterioration in the quality of oil in the Druzhba pipeline. It was only a month to resolve the issue - on May 29, deliveries of already clean oil through the pipeline returned to normal. However, the consequences of the incident, the parties decide so far.

Foreign companies and countries expect compensation and discounts on oil supplies from Russia. Contaminated oil is pumped into reservoirs and is now partially sold at a large discount, and also mixed with pure oil in order to sell it abroad. Russia's losses from the incident are estimated at hundreds of millions of dollars. Three small regional companies were found guilty of pollution; criminal cases have already been initiated against their leaders.
Source: OREANDA-NEWS
Поделиться в соцсетях:
Подписаться на наши группы: Instagram | VK | Facebook | Twitter
Rate this article: