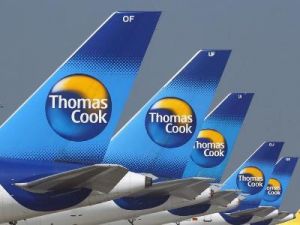 OREANDA-NEWS. The oldest tour operator in the world – British company Thomas Cook went into liquidation after it could not find the means to prevent bankruptcy. Thomas Cook Group, founded in 1841, was one of the largest travel companies in the world, serving over 22 million clients a year.

Booking of tickets for more than 600 thousand clients around the world was canceled. The authorities of the United Kingdom reported that the repatriation of 150 thousand clients of the company from the territory of Great Britain would be the largest in peacetime.

Thomas Cook has canceled trading operations. Its four airlines will stop working. 21 thousand employees in 16 countries, including 9 thousand in the United Kingdom, will lose their jobs.

Interusit, a Russian tour operator controlled by Thomas Cook, assured that the bankruptcy of the oldest British tour operator would not affect the work of the Russian company. Sergey Tolchin, the chief executive officer said that Intourist was legally independent from Thomas Cook, and the company’s clients “leave and return as usually.”

In 2018 its shares fell 86 % on the London Stock Exchange, a market capitalization was 69 million US dollars.