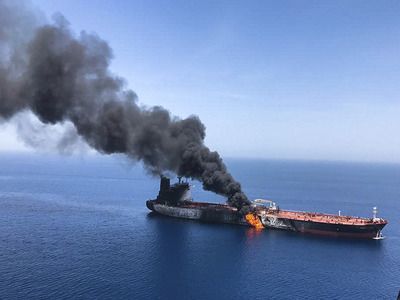 An Explosion on Iranian Tanker Thundered in the Red Sea

After the explosion on the ship, an oil leak occurred, two tanks were damaged. It's noted that the crew of the tanker is safe. Recall, in recent months, Iran has several times detained foreign tankers in the Strait of Hormuz, accusing them of smuggling oil.

So, in September, the Iranian coast guard detained another tanker in the Strait of Hormuz, which, according to the Iranian side, transported smuggled oil. 12 crew members were detained, all of them Filipinos. No ship ownership was reported. In August, the IRGC naval forces detained a tanker belonging to Iraq, transporting, according to their data, 700 thousand liters of contraband oil to one of the Arab countries.

In July, the Islamic Revolutionary Guard Corps (IRGC) was detained in the Strait of Hormuz by the British oil flag carrier Stena Impero, allegedly because the crew turned off the receiver of the automatic recognition system and did not respond to warnings from the Iranian side.