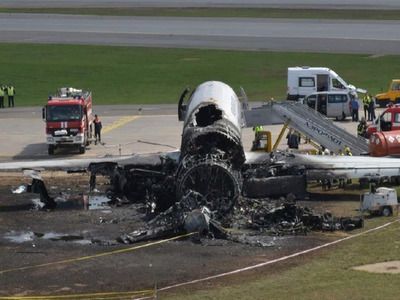 TransportIncidentsAirports, air-traffic controlAir transport
OREANDA-NEWS. Pilots of the SSJ100 which burnt down at Sheremetyevo tried to go to the second round after an attempt of a failed landing. This follows from a preliminary report on the results of a catastrophe investigation published by the Interstate Aviation Committee (IAC). Experts pointed out that landing on the front landing gear with high vertical speed, as well as the deviation of the side control knob completely “on itself” just before landing, led to an intensive rotation of the aircraft in the direction of “opening” (turning the plane with raising the nose and gaining height).

"As a result, an increase in pitch angles (angular movement about the horizontal axis) and an attack occurred, which, while maintaining significant instrumental speed, led to the aircraft being again separated from the runway (the phenomenon of" progressive goat "), despite the full deflection of the control stick to the position" from itself " after the rebound ", - stated in the report.

“After receiving signals about the compression of the left and right main landing gear, the opening of the reverse flaps began, which was completed after the second separation of the aircraft from the runway”, the experts conclude. The second compartment from the runway occurred at a height of 5-6 m. After 2-3 seconds after re-separation, the engine control lever was moved to the take-off thrust position, and the handle was turned to the full stop position.

"These actions can be interpreted as an attempt to perform a withdrawal on the 2nd circle, but due to the fact that before this the thrust reverse of the sash was already activated continued to be in the open position, although the thrust of the engines did not increase," indicates the IAC. At a speed of 258 km/h, the third landing of the aircraft occurred with a vertical overload of at least 5g.
Source: OREANDA-NEWS
Поделиться в соцсетях:
Подписаться на наши группы: Instagram | VK | Facebook | Twitter
Rate this article: