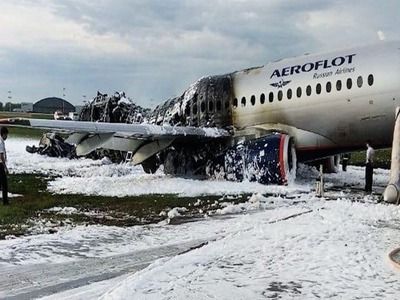 In the Superjet Crash in Sheremetyevo 41 People Were Killed

TransportIncidentsAir transport
OREANDA-NEWS. As a result of a fire on board the Sukhoi Superjet 100 aircraft at Sheremetyevo Airport, 41 people were killed, the Investigation Committee said. 33 passengers and four crew members managed to escape, added Elena Markovskaya, senior assistant to the head of the Moscow Interregional Investigation Department for Transport of the UK. Six people were hospitalized, three of them are in serious condition. The list of survivors was published on the website of the company "Aeroflot", which owns the burnt airliner.

The crash with the Sukhoi Superjet 100 aircraft occurred on Sunday evening. The liner followed from Moscow to Murmansk. After 28 minutes of flight, the crew decided to urgently return to the capital's airport. The plane managed to land only at the second attempt due to adverse weather conditions. With a hard landing, he broke down the racks and the engines caught fire. Then the fire spread to the entire tail of the aircraft.

The acting governor of the Murmansk region, Andrei Chibis, declared three-day mourning in the region. Families of the dead residents of the region will receive a million rubles each, the number of the dead - 500 thousand each. After the tragedy, the UK opened a criminal case, and Prime Minister Dmitry Medvedev ordered the creation of a state commission to investigate the incident. Rostransnadzor, in turn, will unscheduledly check Aeroflot, Sheremetyevo and the State Corporation for Air Traffic Management.

Operational services removed from the fuselage of the Sukhoi SuperJet 100 bodies of all the dead, reported in emergency services. "At the moment, the bodies of 41 victims have been recovered, most of them have been taken to the morgue for forensic examination in Moscow for identification and examination," said a source.