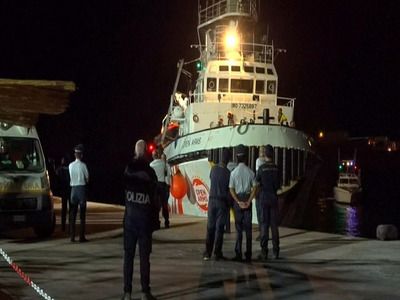 TransportTerritorial administrationState services to societyWater transport and ports
OREANDA-NEWS. The Spanish government recalled that the vessel of the Spanish non-governmental organization Proactiva Open Arms does not have permission to conduct rescue operations at sea. This was announced on Wednesday by Acting Deputy Prime Minister of the Kingdom of Carmen Calvo.

"Open Arms doesn't have permission to save, the captain of the ship knows this", the acting deputy head of the government said in an interview with the radio station of the Spanish radio station. Despite this circumstance, acting Prime Minister Pedro Sanchez decided that a humanitarian way out of this situation should be found".

So, Calvo answered the question whether Madrid plans to take measures against Open Arms, which received a warning about possible fines of up to € 901 thousand in case of continued work to save illegal immigrants. “We all obey the laws”, the acting deputy prime minister added. “This is a rule of law state, and everyone knows what they can and can't do”. As for the ship of the country's Navy, which was sent to the shores of Italy to help previously rescued migrants, Calvo said that he would be ready to transport illegal immigrants, which Spain should accept.

The organization’s vessel assisted migrants about three weeks ago. By decision of the Deputy Prime Minister and Interior Minister of Italy Matteo Salvini, Open Arms was forbidden to enter Italian waters and land migrants on Lampedusa. On Tuesday, the prosecutor's office of the city of Agrigento (Sicily) decided to confiscate the ship and evacuate about a hundred illegal immigrants who were on board. On August 15, Italian Prime Minister Giuseppe Conte said that six EU countries are ready to receive migrants: Germany, Spain, Luxembourg, Portugal, Romania and France.

In 2015, due to the intensification of conflicts in a number of countries in the Middle East and North Africa, the number of people arriving in Europe from these regions increased sharply. The Mediterranean route is the main route for migrants to the EU; the second-largest transit route passes through the Balkans.