The Cableway in Moscow is Temporarily Closed Due to Cyber Attacks 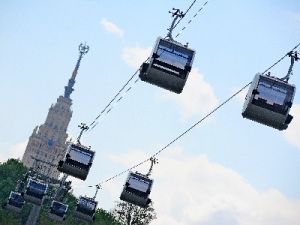 OREANDA-NEWS Opened two days ago for passengers cableway from the observation deck on the Vorobyovy Hills to Luzhniki temporarily suspended its work due to cyber attacks on the servers of the object. This was reported in the press service of the Moscow cableway.

"Today at 14:00 Moscow time November, 28, the computer servers of the Moscow cableway were subjected to an unauthorized cyber attack. Employees, having found it, suspended the road movement then quickly landed all passengers at stations of destination for ensuring the maximum safety of passengers", - it is told in the message.

At the moment, the administration of the facility is forced to temporarily stop the transportation of people. "We apologize for the inconvenience. The further schedule will be announced on the website of the funicular," the press service added.

On November 26 the mayor of Moscow Sergei Sobyanin has opened traffic on the cableway. The route of the cableway  passes over the Moscow river and connects the observation deck on Kosygin street with the Luzhniki stadium. The total length of the road is more than 700 m. the Lift can carry 1.6 thousand passengers per hour.

The cableway, began to work on November 27. On the way there are three stations: "Vorobyovy Gory" on Kosygin street, " New League" is located on the Vorobyevskaya embankment, and "Luzhniki " — on the Luzhnetskaya embankment. Cableway operates 35 booths for eight seats each. For athletes in addition made 10 open chair cabins for four places each. They will move in a small circle: between Vorobyevskaya embankment and the observation deck.

The first month the cableway will work for free. Earlier it was reported that the trip by cableway can be paid by debiting from the wallet of the card "Troika". On weekdays, the cost of one - way cable car will cost 400 rubles, round trip-700 rubles. On weekends, the fare will be 500 rubles one way, there and back - 800 rubles. The length of the road exceeds 700 meters, and the travel time between the end stations will be 5 minutes.