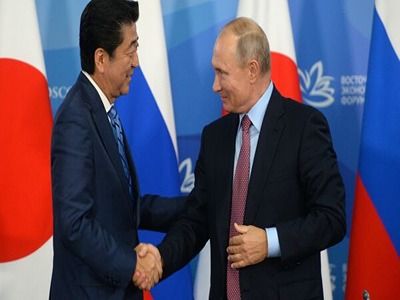 Abe: Development of Relations between Japan and RF Has Reached an Unprecedented Level

WorldInterstate relationsInternational activitiesTerritorial administration
OREANDA-NEWS. Japanese Prime Minister Shinzo Abe believes that over the past year, the development of Japanese-Russian relations has reached an unprecedented level amid the implementation of projects as part of joint economic activities in the southern Kuril Islands. He stated this on Wednesday during a debate in parliament.

"Over the past year, the development of relations between Japan and the Russian Federation, which is based on agreements in Nagato, has reached an unprecedented level", said Abe, answering a question from the leader of the opposition Constitutional Democratic Party, Yukio Edano.

As examples, Abe cited the implementation of the first pilot tour to the southern part of the Kuril Islands for Japanese tourists, as well as the opportunity for former Japanese residents of these islands to visit places where previously they were not allowed access. "We will continue stubborn negotiations to solve the territorial problem and sign a peace treaty", the prime minister added.

For many decades Moscow and Tokyo have been holding consultations with a view to working out a peace treaty following the results of World War II. The main obstacle to this is disagreement over the rights to the southern part of the Kuril Islands. After the war ended, the entire archipelago was included in the Soviet Union, however, Japan disputes the belonging of Iturup, Kunashir, Shikotan and a group of adjacent small uninhabited islands.
Source: OREANDA-NEWS
Материалы по теме: