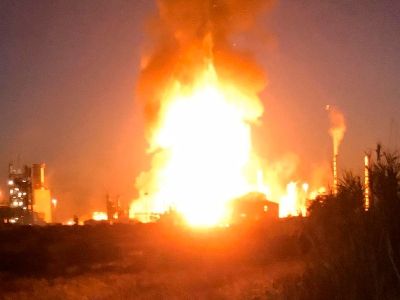 An Explosion Occurred at a Petrochemical Plant in Spain

OREANDA-NEWS. An explosion followed by a fire occurred on the territory of a petrochemical plant in the Spanish province of Tarragona (part of Catalonia). This was reported by the civil defense service.

According to El Periodico, citing the fire service, five people were injured, two are lost. All the wounded are employees of the plant. According to ABC Cataluna sources, at least one person was injured seriously.

Residents of nearby areas were advised not to leave their houses and close the windows. As the newspaper Ara writes, these restrictions will affect at least 30 thousand people.

El Mundo reports that the explosion occurred at the plant owned by IQOXE company manufacturing ethylene oxide and its derivatives, as well as glycols. Firefighters are working on cooling the tank with polypropylene oxide. Emergency services said that the cloud formed by the fire is not toxic.
Source: OREANDA-NEWS
Подписывайтесь на наши группы: Instagram | VK | Facebook | Twitter
Материалы по теме:

The European Parliament Told Who Benefits from Anti-Russian Rhetoric