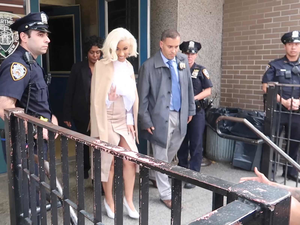 Cardi B Indicted By A Fight In A Strip Club

WorldIncidentsEvents
OREANDA-NEWS.The rapper was charged with 14 charges, including two counts of felony assault with intent to cause grievous bodily harm.

Cardi B initially faced two charges in connection with her arrest on August 29, 2018, in which she reportedly ordered an attack on two female bartenders at angels strip club, who go by the names Gade and Baddie G. The attack was caused after Cardy accused Jade of sleeping with offset, with whom she is married and shares one daughter.

The rapper rejected a plea deal on Friday that would include her plea of guilty to one misdemeanor charge. Her lawyer claims that she did not harm anyone during the incident.

Her next trial date is scheduled for August 9.