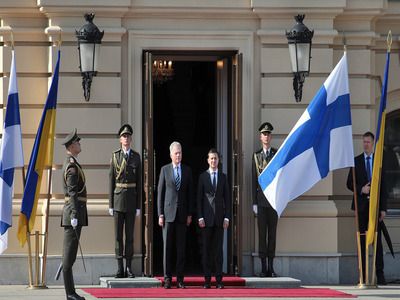 WorldInterstate relationsEventsMinistries and departments
OREANDA-NEWS. Finnish President Sauli Niinistö on Friday did not support the call of Ukrainian President Vladimir Zelensky to European countries to maintain sanctions against Russia. Speaking at the Yalta European Strategy (YES) forum in Kiev, Vladimir Zelensky said that in the West they began to talk about lifting sanctions, as they were losing money. “And we are losing people”, the Ukrainian leader said. “Until there is peace, sanctions must be maintained”.

However, Sauli Niinistö, who spoke after him, recalled that the statements that “as a result of the sanctions the Russian economy will collapse and they will have to retreat” have been heard for a long time. “This has not happened and I’m afraid that this will not happen in the near future”, said the President of Finland.

“We need to try,” he continued. “We already have a living example here when Presidents Putin and Zelensky were able to agree on an exchange. This, of course, is a small step, maybe it won't lead to anything. But it was done”. "If we continue to think only in the black and white categories, then we will be defeated. And if we persevere, we will succeed. I have a deep understanding that Europe should be returned to the peace process", Sauli Niinisto concluded his thought.

Earlier it was reported that Moscow was concerned about US statements about the possibility of applying sanctions against Rosneft, while Washington still lacks understanding of the processes in Venezuela. This was stated to the Russian media by Deputy Foreign Minister Sergei Ryabkov. Abrams said earlier that the US will allow sanctions against Rosneft in the future for cooperation with Venezuela, but are not yet ready to introduce them.