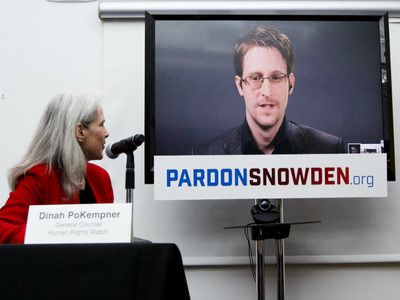 OREANDA-NEWS. France refused political asylum to former US National Security Agency (NSA) agent Edward Snowden back in 2013, and the current situation doesn't provide a basis for changing this decision. Such an opinion was expressed on the French television channel by French Foreign Minister Jean-Yves Le Drian.

“Mr. Snowden must be pleased. He has a lot to do, he lives in Moscow. He didn't seek political asylum in France yesterday, but in 2013. However, then the authorities regarded his request as insignificant. And I don’t see today that has changed from a legal or political point of view, so, in my opinion, it makes no sense to change something".

In 2013, Snowden made public the methods of electronic surveillance of American intelligence services, including illegal wiretapping of negotiations between foreign leaders. Fleeing persecution by the US authorities, Snowden sent asylum requests to the authorities of several countries, including Russia. On August 1, 2014, he received a residence permit in the Russian Federation for three years, which was later extended for the same period.

In the USA, Snowden is charged with violating two articles of the espionage law. For each of these items, he faces up to 10 years in prison. Representatives of the US administration have repeatedly stated that they consider Snowden a traitor and are not going to forgive him, since he caused serious damage to the interests of national security.

In the Permanent Record memoir, which will go on sale September 17, Snowden spoke about his life in Russia. The fact that he changes his appearance when he goes to the streets of Moscow and never gives his address to taxi drivers. About the bride who came to him in Russia and became his wife.