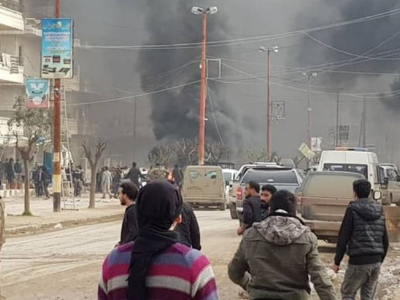 In Syria, 20 People Died in an Explosion

OREANDA-NEWS. At least 20 people were killed and dozens were injured in an explosion of a mined fuel oil tank lorry in the city of Afrin located in northwestern Syria.

Anadolu information agency reports that the attack occurred on a crowded street in the city center. As a result of the explosion, the house was damaged and several cars burned. The wounded people were taken to a local hospital, the death toll can increase.

According to local authorities, the Kurdistan Workers’ Party banned in Turkey and the Kurdish Self-Defense Forces associated with it were involved in the attack.

Official Damascus has repeatedly called illegal the presence of Turkish forces on the border of Syria, which are conducting an operation against Kurdish forces there, and urged Ankara to withdraw troops.