US State Secretary Allowed the Introduction of Sanctions against Belarus 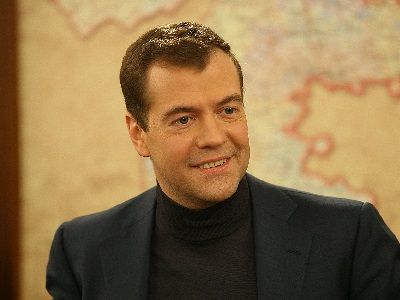 OREANDA-NEWS  Russian Prime Minister Dmitry Medvedev will pay an official visit to Bulgaria on the bebining of  March. According to the press service of the government, during the visit  "meetings with the President of the country Rumen Radev, Prime Minister Boyko Borisov and other officials" are planned.

"The agenda of the upcoming talks includes topical issues of the Russian-Bulgarian trade, economic, investment, scientific, technical, cultural and humanitarian cooperation, the implementation of joint projects in the energy sector, industry, agriculture, tourism and other areas," the report said.

The press service of the Bulgarian government, in turn, noted that "the Prime Ministers Borisov and Medvedev will hold talks face to face, and then as part of two delegations." "The main topics to be discussed are related to bilateral cooperation in the field of energy, economy and tourism," the report said.

It is noted that Medvedev's visit to Sofia will begin with an official welcoming ceremony at the memorial Church of St. Alexander Nevsky, where the laying of wreaths at the monument to the Unknown soldier will take place.

On March 5, Medvedev and Borisov will open the Bulgarian-Russian Business Tourism Forum.

Then, Russian Prime Minister Dmitry Medvedev will pay an official visit to Luxembourg on March 5-6, the government's press service reported.

"During the talks, Russian Prime Minister  and Luxembourg Prime Minister  will discuss topical issues of Russian-Luxembourg trade and economy. As a result, a number of bilateral documents are expected to be signed," the press service of the Russian Cabinet said.

This is the first visit of the Russian Prime Minister to Luxembourg. In may 2007, Russian President Vladimir Putin visited the Grand Duchy for the first time.

Xavier Bettel, who succeeded Jean-Claude Juncker as Prime Minister of Luxembourg at the end of 2013, visited Russia twice. In October 2015, he held meetings with the Prime Minister and the President of Russia in Sochi.

Following last talks with his Luxembourg counterpart, the Russian Prime Minister noted, in particular, that the parties agreed to increase cooperation, including in the areas of the digital economy, information technology and space.