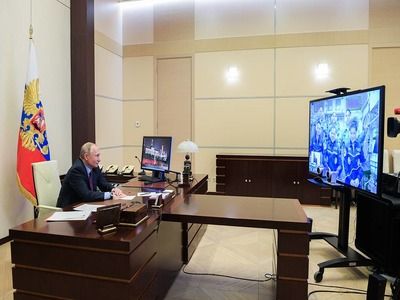 WorldSpace transportationOilInterstate relations
OREANDA-NEWS. Russian President Vladimir Putin said he plans new conversations with foreign partners on oil issues. As a successful example of international cooperation, he noted the interaction of the Russian Federation and the United States in the space industry.

Putin noted that the interaction of the Russian Federation and the United States in the space industry is one of the areas of joint action. "Just as we are trying to organize work with urgent problems - I don’t want to talk about it, but I have to - I mean the fight against the pandemic, I mean the situation on world markets". "Yesterday, only with the President of the United States, Donald Trump, they discussed these problems, we still have conversations on this subject", the Russian leader said. “Thank God, cooperation is developing not only in space, but also in other areas”, Putin said.

Security Officials in Bulgaria Suspect a Six Russians of Organizing Explosions at the Weapons FactoriesOreanda.ru | 28.04.2021 13:31:04