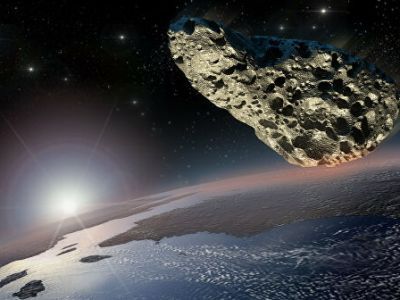 Russian Space Corporation Reported on an Asteroid Approaching the Earth

OREANDA-NEWS. Russian state corporation Roskosmos reported on its official Internet site that a previously unknown small asteroid, which can be compared in size with the Chelyabinsk meteorite, is approaching the Earth.

The object was discovered on November 6 by a warning system about dangerous situations in near-Earth outer space located near the village of Peredovoye (Amur Region). The asteroid has a transverse size of 10–15 meters, it is going down a heliocentric orbit with an orbital period of 2.89 years.

The specialists of Roskosmos reported that the meteorite was found in the interval of greatest approximation, the minimum distance from the center of the Earth was 139 thousand 410 kilometers. “The discovered object was not previously observed and is a new asteroid periodically approaching the Earth,” the message says.

On November 8, the British and American observatories confirmed the information received by Russian specialists.

According to Roscosmos, this is the second asteroid discovered in the last three months. In late July, an asteroid approaching the Earth in a “rather unique” orbit was found. The minimum distance from the Earth was 187 thousand 791 kilometers.

As for the Chelyabinsk meteorite, it fell to the Earth on February 15, 2013. The fall of an object with a diameter of 20 meters was accompanied by a series of explosions. As a result, more than 100 thousand square meters of window glasses were broken by the blast in residential and industrial buildings in the Chelyabinsk Region.