Suspended Mayor of Riga Refused to Leave the Office 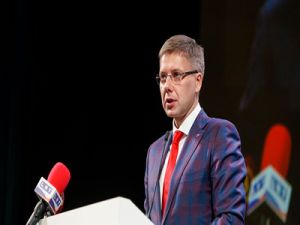 OREANDA-NEWS. Riga Mayor Neil Ushakov said he did not intend to leave his office in connection with the decision of the Minister of Regional Development Juris Pūce to dismiss him.

On Friday, the official publication of Latvijas Vēstnesis published the order of Pцеce about the dismissal of Ushakov. He is suspected of inappropriate use of more than 18 million euros of budget funds. The mayor may dispute this within 30 days and, if the court supports him, return to his post. He stated that he himself would cover all costs associated with the appeal. "The chances of winning in court are assessed as highly as possible," he said at a press conference on Friday. The statement to the court itself, of course, is not ready, because the decision of the minister was published at midnight today, "said Ushakov.

"The decision [to remove me from office], which was taken, is political. Further, to ensure the work of the Duma, it is absolutely clear that we have a team of 32 deputies who have worked together since 2009. This team participated in two municipal elections in a row with a single list, and in these two elections received an absolute majority of the votes of Riga, "he said.

“The team will ensure the effective and proper functioning of the self-government until the moment when all this political fuss over the elections to the European Parliament ends,” he added.

According to him, the ruling coalition in Gorduma, consisting of representatives of the Social Democratic Party "Consent" headed by him and the Party "Honor to Serve Riga", "will continue to work and carry out all the activities and works that have been planned."

The dismissed mayor stated that he did not find in the list of violations accused by the Latvian authorities of “a single violation of the law”.