The Republic of San Marino Refused to Impose Sanctions Against Russia 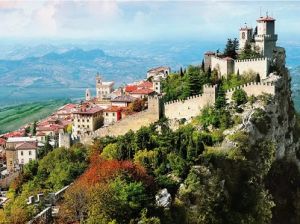 Nicola Renzi noted that despite the constant policy of rapprochement and integration with the EU, San Marino did not impose sanctions against Russia and opposes them. The country's leadership holds the position that such measures are most painful for the population of the countries against which they are directed. According to Renzi, San Marino has always supported dialogue as the main tool for conflict resolution.

"San Marino did not impose sanctions against Russia. Adhering to the old principle that has always characterized San Marino foreign policy, we have always been against sanctions regimes and all types of embargoes, believing that such measures hurt the population of the countries against which they are directed.  Our biggest goal is to become a permanent platform for dialogue between the warring parties to achieve peace and harmony between the peoples," the Secretary of state said.

During the official visit, the parties will consider bilateral relations in the political, economic and cultural spheres, as well as issues of international agenda of mutual interest. In addition, Lavrov will speak in the Grand General Council — the unicameral Parliament of San Marino.

The country-enclave, surrounded by Italy, the oldest Republic in the world, founded, according to legend, in 301 by the stonemason Marino, on Thursday for the first time in the history of diplomatic relations the Minister of Foreign Affairs of Russia Sergey Lavrov comes there. This is his first official visit to the country in the history of bilateral diplomatic relations between the two countries.  According to Nicola Renzi, the visit of the Russian Foreign Minister confirms the high level of bilateral relations and at the same time is an impulse to further increase cooperation in the economic, social and cultural spheres.