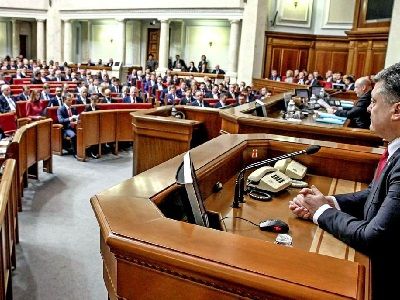 OREANDA-NEWS Verkhovna Rada of Ukraine adopted the law on the state budget of the country for 2019, providing for a maximum deficit of almost 90 billion hryvnia ($3.21 billion). This decision was supported by 240 deputies (the minimum number of votes for adoption - 226).

The Cabinet of Ministers of Ukraine planned revenues of the state budget-2019 at the level of 1,026 trillion hryvnia ($26.64 billion), expenses in the amount of 1,112 trillion hryvnia ($39.71 billion). The Ukrainian government reported that next year it expects GDP growth of 3%, and the inflation rate within 7.4%.

One of the largest items of expenditure - the security and defense sector - "eat" almost 212 billion ($7.57 billion), and the pension will send 167.5 billion (almost $6 billion). The average annual forecast of the hryvnia exchange rate is laid at the level of 29.4 hryvnia for $1. In 2019, the costs of servicing and partial repayment of public loans are provided at the level of 417 billion hryvnia ($14.9 billion), the Ministry of Finance reported.

The head of the Parliament Andrei Parubiy did not hide earlier that the deputies had a task to approve the state budget-2019 until December, so as not to miss the chance to get new financial loans, including from the International monetary Fund, this year. "It is no secret that the adoption of the budget is one of the prerequisites for obtaining financial assistance, which today is very important for our country," he said. Another condition was put forward by the President of the country Petro Poroshenko, who directly stated in the context of raising gas prices for the population by 23.5% from November 1 (another requirement of the IMF) that he will not sign the budget if it does not fully cover the necessary expenses for subsidies. As reported by the acting head of the Ministry of Finance Oksana Markarova, the second reading of the revenue due to additional taxes and fees "recovered" by another 18 billion hryvnia. She stressed that all social spending in 2019 will be fully funded

However, the opposition deputies, who promised not to vote for this document before, pay attention to the fact that the state budget is aimed primarily at paying off the country's external debts by reducing the cost of social payments. Thus, according to the Deputy Alexander Dolzhenkov, 145 billion hryvnia ($5.2 billion) will be spent on servicing the state debt, and another 272 billion hryvnia ($9.74 billion) will be spent on repayment of the debt, which together accounts for more than 40% of the entire revenue part of the budget. Thus against the background of devaluation of the hryvnia, according to him, the increase in the minimum wage in dollar terms is not actually even higher than the figures of 2013. "In 2013, the minimum wage in Ukraine was at $152, and in 2019, despite the pretentious statements about its increase, in terms of the currency it will be only $141," explains Dolzhenkov. Speaking about the subsistence level, the Deputy stressed that in 2013 it was $147 per person, and in 2019 only $66 was pledged.