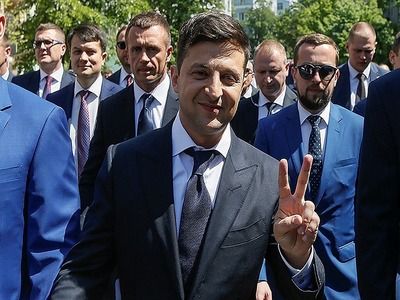 WorldState services to societyInterstate relationsMinistries and departments
OREANDA-NEWS. The Ukrainian authorities plan to confiscate the land if its owners are Russian legal entities or individuals. This was stated by Deputy Minister of Economic Development, Trade and Agriculture of Ukraine Taras Vysotsky, commenting on the content of the bill on opening the agricultural land market.

"The draft law stipulates that the company-buyer or citizen should be checked during registration for the origin of the beneficiaries. In addition, there will be constant monitoring of land owners. If, as part of the monitoring, it becomes known that some Russian or the company has become the owner of Ukrainian land, the land will be confiscated", Vysotsky said in an interview with the Ukrainian media, the Deputy Minister said that the confiscation will be carried out in favor of the state.

The Ministry of Economic Development, Trade and Agriculture of Ukraine on September 20 published for discussion a draft law that provides for the lifting of the ban on the sale of agricultural land from October 1, 2020. It is noted that citizens and legal entities of Ukraine, territorial communities, and the state can acquire such plots. At the same time, the draft law contains a norm that individuals and legal entities, foreign states that fall under the sanctions law will be deprived of the right to purchase land.

Earlier, President of Ukraine Volodymyr Zelensky instructed the Verkhovna Rada to adopt a bill by December 1 to create an agricultural land market and lift the moratorium on its sale. In general, according to the head of government, earlier, with the participation of the World Bank, 25 different scenarios for opening the land market were worked out, while the key criterion is to achieve the “maximum economic effect”.
Source: OREANDA-NEWS
Подписывайтесь на наши группы: Instagram | VK | Facebook | Twitter
Rate this article:
Print