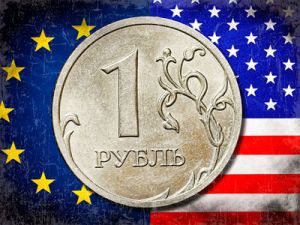 OREANDA-NEWS. US dollar and euro are falling on the Moscow stock exchange on Monday morning. The ruble is rising to a bi-currency basket due to reduction in sanctions risks after the completion of the inquest done by Special Prosecutor Robert Mueller. Mueller found no evidence of the collusion of President Donald Trump with Russia during the 2016 presidential campaign.

USD has been on 73,7 penny above the level of the current official exchange rate, while EUR has been 32.5 kopecks above the official rate.

As experts of Interfax note, the ruble resumed growth against USD and EUR at the start of trading after a corrective decline on Friday. Investors positively assessed the absence of new negative conclusions in the report on the results of the inquest done by Special Prosecutor Robert Mueller. As US Attorney General William Barr said in a short letter given to Congress on Sunday, there was no collusion between Trump and Moscow.

At the same time, most emerging markets currencies are falling on Monday morning on fears of a slowdown in economic growth in the world due to the inversion of the yield curve of US government bonds in the area from three months to 10 years. In particular, the yield of 3-month securities was higher than the yield of 10-year-old for the first time since 2007, the period before the global financial crisis. Inversion is considered to be one of the precursors of the recession in the US economy and suggests that investors are waiting for the reduction of interest rates in the future.

The oil market in Asian trading on Monday continues to fall due to fears of further weakening of economic growth in both developed and developing countries. The price of may contracts on Brent on the London ICE Futures exchange fell by 0.6% to $66.63 per barrel by 10:01 Moscow time. The value of WTI futures for may on the New York Mercantile Exchange (NYMEX) electronic trading decreased by 0.83% to $58.55 per barrel.

As the oil service company Baker Hughes reported on Friday, the number of operating oil drilling rigs in the United States fell for the fifth week in a row. Last week the figure fell by 9 units to 824, which portends some weakening of activity in the industry.