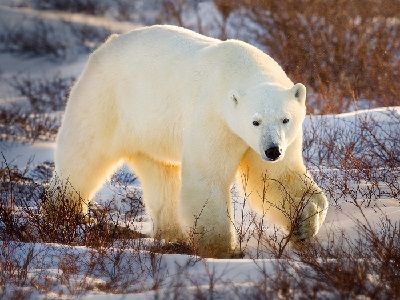 20 Polar Bears with Cubs "Surrounded" the Village in Chukotka

OREANDA-NEWS  A group of polar bears with cubs roams near the national village of Ryrkaypiy in Chukotka in anticipation of the approach of ice and sometimes out of curiosity enters the village. The Commissioner of the head of the village administration Yevgeny Malakhov told about this problem.

"Now the village has a cluster of polar bears-both adults and cubs. The migration route of bears passes through our village. They are waiting for the ice to come or rise. Polar bears, if they go to the village, then because of the usual curiosity. The group "Bear patrol" leaves and frightens them from noise devices", — the interlocutor noted.

According to this information, due to climate change now the ice cover is installed later. From year to year, the dates of the formation of the ice field vary, last year the bears also wandered around the village.

As told the head of the "Bear patrol" in the village of ryrkaypiy Tatyana Minenko, now marked by the village about 20 of these predators. "Last year, bears also gathered in the area in anticipation of the ice, then there were fewer," she said.

In addition to the fact that the bears are frightened away from the village, they organize feed points so that they do not approach the housing.

"We clean the coast from the carcasses of walruses that remain on the rookeries. We negotiate with the administration, with the military, with the civilian population, collect carcasses of dead walruses and organize several feed points, bears go there. One of the points is about a kilometer from the village, so it's easier for us to look after these predators," Minenko said.

She noted that bears wait when there will be a sludge, ice. At this time they feed on walruses, including the dead, on the shore. When the ice field is established, the animals confidently go to sea and there are extracted seals.

Rural settlement Ryrkaypiy Iultinsky district is located on the shores of the Arctic ocean, near the urban settlement Cape Schmidt. Translated from the Chukchi language "Ryrkaypiy" means "constipated walrus", or "an area of land, extending far into the sea and stopped the way the walrus", because of the large number of walruses nearby rookery off the coast of the Chukchi sea.