Ex-President of Kyrgyzstan Admitted that He Shot During the Assault 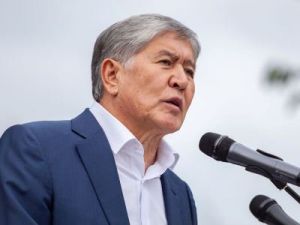 OREANDA-NEWS. The ex-President of Kyrgyzstan Almazbek Atambayev admitted on Thursday that was shot during the attempt of his arrest.

"My supporters did not have weapons, I personally shot during the incident," he said. However, Atambayev said that he "tried not to get" people. According to him, he is also prepared to promote the release of his supporters detained during the storming of special forces soldiers "alpha", who are now under guard in the house of the former President.

Storm the residence of the former President started on the evening of 7 August. According to the latest data, injured 52 people, 38 of them were hospitalized, two are in intensive care. One commando was killed, upon his death, and attack other law enforcement officers opened pre-trial proceedings.