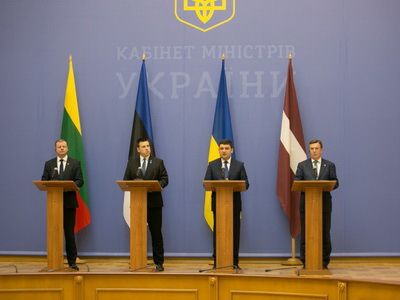 "Indeed, Ukraine’s future will determine European security architecture in the coming decades. We must work together and make efforts, in order to ensure peace, security and stability in Europe," said Ratas.

In the meetings, Prime Minister expressed support for the sovereignty and territorial integrity of Ukraine. "Estonia’s position is clear – the sanctions must remain in force until Russia again respects international law, including the provisions that were agreed upon in Minsk agreements," stressed Prime Minister Ratas.

"The people of Ukraine have made their choice - they want to move closer to Europe. It has been their voluntary and sovereign decision. We will further support this decision and help them to advance their country’s development. At the same time, we encourage Ukraine to continue implementing reforms, be it a more efficient battle with corruption, improving business environment or enhancing the work of judicial system," said Prime Minister.

In bilateral meetings with the President of Ukraine Petro Poroshenko and Prime Minister Volodymyr Groysman, bilateral relations between Estonia and Ukraine, including economic cooperation, were also discussed in addition to security issues, Ukraine’s European integration and Estonian Presidency of the European Union.

Prime Minister said that the interest of Estonian entrepreneurs towards Ukrainian market is still huge and they are ready to invest in Ukraine, but only after the improvement of business environment. "Strengthening the principles of the rule of law and progress of reforms in Ukraine would certainly encourage Estonian entrepreneurs and contribute to the wellness of Ukraine through the increase in investments," said Prime Minister.

Prime Minister Ratas emphasized in Kyiv that Eastern Partnership is one of the priorities of the forthcoming Estonian Presidency of the Council of the European Union.

"We have agreed that the Eastern Partnership Summit will take place this November in Brussels. This is a good opportunity for Ukraine and other Eastern partners to introduce the results of their reforms and enhance cooperation with the European Union. It is necessary to show in a more persuasive manner than previously how would the ordinary people benefit from the closer integration of Ukraine with the European Union." Ratas added that Estonia supports both a quick visa exemption of Ukraine with Schengen as well as the ratification of the Association Agreement between the European Union and Ukraine.