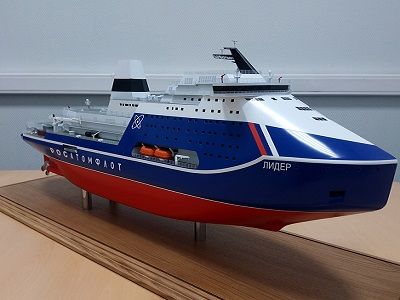 Construction of One Nuclear Icebreaker "Leader" Will Cost 98.6 Billion Rubles

OREANDA-NEWS  The construction of one nuclear icebreaker "Leader" without additional costs will be 98.6 billion rubles. This information is published in the report of the head of "Rosatom" Alexey Likhachev on October 3.

Such assessments, according to the document, are contained in the calculations of the interdepartmental working group chaired by Deputy Prime Minister Yuri Borisov. Funds, as explained by the publication, will have to allocate the budget from 2020.

This amount, as specified in the message Likhachev, does not include a Bank guarantee, insurance for the period of construction and nuclear fuel for the first load. The money for this Ministry of Finance, Ministry of Economy and Rosatom should be found by November. In addition, in 2018-2020, the Ministry of Industry and Trade, should allocate 950 million rubles for the development of the "Leader" electric movement system.

In total, Russia plans to build three icebreakers of this project. In September, the Cabinet finally determined the executor of the construction of the "Leader".

The contract for the first vessel should be signed no later than December of the next year, the laying will take place no later than February 2020, and delivery — in 2027. Financing of construction will be fully carried out on budget money, the newspaper notes, according to which this position was supported by Russian President Vladimir Putin.

At the same time, to keep up with the bookmark, an advance of 3.5 billion rubles. This, as the publication points out, follows from the letter of Deputy Prime Minister Yuri Borisov and the head of Rosneft Igor Sechin on September 6. Subsequently, these funds will be reimbursed from the budget, the message reads. The development of documentation, according to the documents available to the newspaper, includes the completion of the RITM-400 reactor facility, including the development of the core. The contract for the development of this documentation, "Star", should conclude with the Central design Bureau "iceberg" at the beginning of next year.​