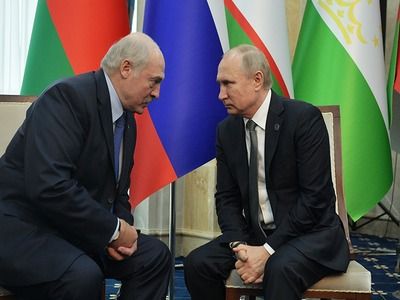 StateState financeOilInterstate relations
OREANDA-NEWS. President of Belarus Alexander Lukashenko expressed surprise at the interpretation by Russian ministers of his agreements with Russian President Vladimir Putin on oil supplies and compensation for losses to the Belarusian side from the tax maneuver in the Russian oil sector. According to the Belarusian news agency, Lukashenko said this at a meeting with Chairman of the Eurasian Economic Commission Mikhail Myasnikovich on Thursday.

“We didn’t have time to agree with Putin that they would compensate us for the reduction of this duty at the expense of bonuses or something: if, for example, we received $ 1 billion from the duty last year, and today $ 700 million, then Russia will compensate $ 300 million, then in the evening the ministers interpret in their own way our agreements - two presidents", said Lukashenko.

The Belarusian president considers the requirements of Russian oil companies to receive a premium on the price of oil supplied to Belarus unreasonable. "So the bonus is paid to those who buy. If we buy the goods, motivate, you give us the bonus. No. Why - because there are no normal rules. The right to force is to incline, force. This is not normal", Lukashenko said.

He also expressed dissatisfaction with the interpretation of oil and gas agreements in the Russian media. “And every day attacks are launched in the media: Lukashenko wants something. Yes, I don’t want anything, except what we agreed on”, Lukashenko explained.
Source: OREANDA-NEWS
Материалы по теме: