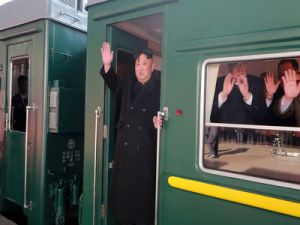 OREANDA-NEWS. DPRK leader Kim Jong-Un will arrive in Vladivostok on Wednesday, April 24, to meet with Russian President Vladimir Putin. It is reported by the Russian media, citing the source. According to the newspaper, Kim Jong-Un will spend the night of April 23-24 in the North Korean city of Rajin on the coast of the Sea of Japan, after which he will go to Russia. On April 24, a delegation of 230 people in an armored train will arrive in Vladivostok.

This information source confirmed the source in the Far Eastern Railway. “In the morning the train arrives at the station Hassan, then follows to Ussuriysk, from there to Vladivostok. Today, the movement of trains in the region in the schedule. The schedule may change during the movement of an armored train on the Khasan-Ussuriisk branch, and then on the Transsib Ussuriisk-Vladivostok segment, ”said the source.

In preparation for the arrival of Kim Jong Un, at the gate of the Vladivostok station, the entrance was deepened by 20 cm so that his limousine, which did not pass in height, could pass through them. The source noted that the North Korean leader will be accommodated in a suite on the campus of the Far Eastern Federal University on Russky Island. April 25 will be a meeting of the two countries.

According to the visit plan, Kim Jong-un will leave Vladivostok on April 26, because after the talks with Putin, he will have a cultural program. Among the places he can visit are: The Military Historical Museum of the Pacific Fleet of Russia and the Maritime Theater Primorsk Stage. Vladimir Putin, in turn, after the meeting, will fly to China to participate in the Belt and Path forum. Earlier, the Kremlin called the topics of negotiations, including the development of bilateral relations, the problem of denuclearization and regional cooperation.