Russian Foreign Ministry Advised Against Traveling to Italy and South Korea due to Coronavirus
State, 26.02.2020, 21:33

Negotiations Between Putin and Erdogan Began in Sochi 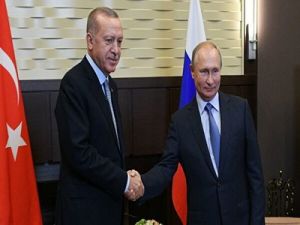 OREANDA-NEWS. Russian President Vladimir Putin and Turkish leader Tayyip Erdogan began negotiations in a narrow format, the meeting is being held at the Bocharov Ruchei residence in Sochi.

The conversation will be “thorough, complex and quick”, they will have to discuss a lot of topics, Putin’s spokesman Dmitry Peskov told reporters earlier.
It is expected that the main subject of the dialogue will be the situation in Syria, taking into account the Ankara military operation there and the agreements of Turkey and the United States on a 120-hour ceasefire.

The day before meeting with Putin, Erdogan said that Ankara would "take steps" on Syria after its talks with the Russian president. On Tuesday, five days of suspension of operations expire. The Turkish president also announced that he intends to discuss with his Russian counterpart the next phase of the process of creating a security zone in northern Syria. Before the start of negotiations in Sochi, Putin called the situation on the Syrian-Turkish border “acute,” and the dialogue demanded.