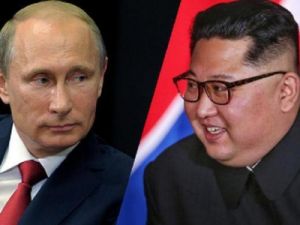 OREANDA-NEWS. A meeting between Russian President Vladimir Putin and North Korean leader Kim Jong Un can take place at the end of next week. It is reported by the South Korean agency "Ronhap", citing sources.

The interlocutors of the agency said that Vladimir Putin will arrive in Vladivostok on the eve of his visit to Beijing on April 26–27, where the participation of the Russian president in the One Belt, One Way Forum is planned. It is assumed that at the same time Kim Jong Un will arrive in the capital of the seaside region.

It is assumed that during the meeting, the DPRK leader will try to enlist the support of the Russian president to put pressure on Washington. Earlier, Kim Jong-un announced his readiness for the third time to meet with US President Donald Trump for talks on the North Korean nuclear program, but only if the position of the United States changes. Speaking in Pyongyang the other day, Kim Jong-un called on Trump to give up “American-style” negotiations when the United States “unilaterally put forward its demands.”

The first ever meeting of the two leaders took place in Singapore in June 2018. It ended with the signing of a document according to which North Korea pledged to pursue nuclear disarmament in response to US security assurances. However, later the media reported that the DPRK continued nuclear development.

The second summit of the DPRK and the United States was held in February in Hanoi. It discussed the complete cessation of the DPRK's nuclear program in exchange for the lifting of all American sanctions against Pyongyang. The meeting ended in failure - the leaders of the United States and the DPRK did not sign a joint declaration. However, Trump continues to argue that he has a good personal relationship with Kim, and expresses confidence that the leaders will be able to agree.