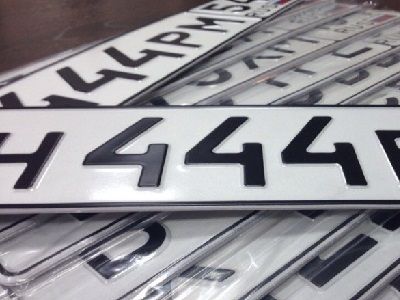 There Will Be New License Plates in Russia

OREANDA-NEWS On January 1, 2019, Russian drivers will be issued new license plates that differ in shape and size from those used now. The development of the document began in 2016. The idea belongs To the scientific center of traffic safety of the Ministry of internal Affairs.

According to the new rules, motorcyclists will receive numbers of reduced size: 190 by 145 millimeters. This decision was made due to the fact that the country has a lot of foreign motorcycles, and they have too small area under the number. The current Russian state signs are not placed on most devices of foreign production.

Numbers for Maxi-scooters are introduced for the first time. For them, the state signs will be the same size as for motorcycles, only with a different set of letters and numbers.

Also, the new standard introduces special motorcycle numbers on a red background for employees of foreign diplomatic missions and signs for ATVs.

The owners are Japanese and American cars with non-standard mounting location will give a square marks 290-170 millimeters. Many of these cars have a square rear area, and car owners, like bikers, use adapters or bend the standard number.

New state signs will be issued to owners of retro and sports cars. From the rest of the characters they will be separated by a dash of the letter "K"or " C". For example, «К ММ97677RUS» and «С ММ97677RUS». Plus, for such vehicles can develop special rules of the road.

Curiously, each such sign will have a unique manufacturer's code that allows you to set who and when it was produced and sold. New GOST lifted the ban on drilling additional holes in the sign. The restriction is only due to the fact that all additional attachments should not affect the symbols, flag and code RUS. Experts say that to recognize new signs on the roads will not be difficult for traffic cameras.