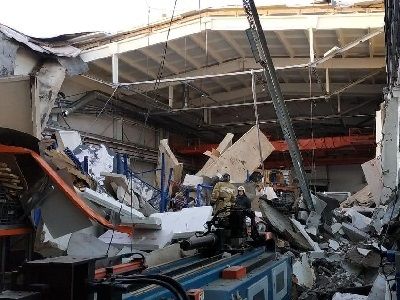 Three People Died Under the Collapsed Roof in Dzerzhinsky

OREANDA-NEWS   Three people were killed in the collapse of the building in Dzerzhinsky, Moscow. The Head Department of the Ministry of Emergency Situations across the Moscow region reported about it.

"Under blockages bodies of three victims are extracted. Four more were hospitalized, "  the source said. Earlier it was reported about one dead.

According to EMERCOM in the Moscow region, in the production building collapsed roof. The emergency services said that the roof collapsed on the territory of LLC "Techno Group", which produces equipment for ventilation systems.

"According to preliminary data, from under the rubble extracted all who could be under them," - said the representative of the Ministry of Emergency Situations. At the same time, he added that analysis of blockages proceeds.

According to the Ministry of Emergency Situations, the collapse of concrete floors of a one-storey industrial building, which belongs to "Technogroup", occurred during the repair work. "The area of the collapse was 130 square meters," the Ministry said.

The law enforcement agencies said that the cause of the collapse, according to preliminary data, was a violation of "safety and technology during repair and construction works."

In total, 116 people and 35 units of equipment were involved in the elimination of the consequences of the collapse.

As reported in a press-service of municipality, to the place of state of emergency the first Deputy Head of administration of the city district Dzerzhinsky Nikolay Fedyushkin left.

Earlier, the Minister of Health of the Moscow region Dmitry Matveev said that as a result of the incident in Dzerzhinsky city hospital hospitalized six people with injuries of varying severity. Doctors provide all necessary assistance to the victims. Six more were given first aid, they did not need hospitalization. Three people died.

The United States Did Not Receive Official Information About Retaliatory Sanctions from RussiaOreanda.ru | 21.04.2021 11:34:47