Trump: Russia Sent US Aircraft with Medical Equipment in Connection with Coronavirus
World, 31.03.2020, 08:20

Zhirinovsky Opposed the Propaganda of Alcohol in Soviet Songs 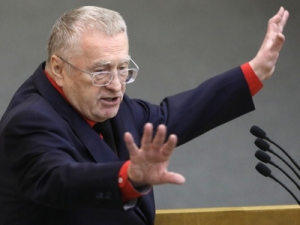 OREANDA-NEWS This idea occurred to the politician while listening to the “Moscow Says” broadcast.

Vladimir Zhirinovsky wrote in his Telegram channel that at 5:30 he heard the Soviet song “It’s time to hit the road” on the radio station. He drew attention to the line "We will drink once and will drink twice for our glorious deeds, but so that tomorrow the head does not hurt!"

The song “It’s time to hit the road” was written by Vasily Solovyov-Sedyom and Solomon Vogelson for the movie “Heavenly Squalor”. It was released on April 1, 1946, then the song became widely known.