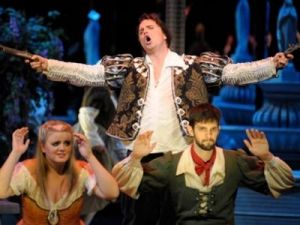 Composer Jake Heggie—of “Dead Man Walking” fame—returns to the Musical Arts Center stage with his latest creation, “It’s a Wonderful Life,” based on the iconic film of the same name, in November. Audiences will be treated to the direction of Leonard Foglia and the set design of Robert Brill, both of whom filled these roles in the work’s recent Houston Grand Opera premiere.

Leonard Bernstein’s sizzling “West Side Story” will bring the season to a close in April. Michael Shell will direct, while Steven Kemp, from IU Opera’s “Dead Man Walking,” will design the sets.

The fall ballet will include “Flower Festival in Genzano,” choreographed by August Bournonville and set to music by Edvard Helsted and Holger Simon Paulii, “Lascia la Spina, Cogli la Rosa,” with choreography by Jacobs’ own Sasha Janes and music by George Frideric Handel, “Sketches from Grace,” set by Janes to music by Leonard Cohen, and “Opus Jazz,” choreographed by Jerome Robbins to music by Robert Prince.

IU Ballet’s immensely popular production of Peter Ilyich Tchaikovsky’s “The Nutcracker” will return in November and December with choreography by Vernon and lush set and costume designs by C. David Higgins.

George Balanchine’s choreography and L?o Delibes’ music will pair in “La Source” to begin the spring ballet. The program will also feature Martha Graham’s “Diversion of Angels,” with music by Norman Dello Joio, and “Sandpaper Ballet,” choreographed by Mark Morris to music by Leroy Anderson.

Single tickets for all productions go on sale to the general public Aug. 21.

In addition to artistic teams led by IU Jacobs School of Music faculty and numerous renowned guest artists, IU Opera and Ballet Theater boasts a history of serving as a springboard for vocalists who go on to perform on the world’s most important opera stages. Last month, master’s student and IU Opera regular Richard Smagur won the Grand Finals of the Metropolitan Opera National Council Auditions, the most prestigious vocal competition in the country, joining a list of over 30 previous Jacobs School winners—more than any other conservatory or school of music in the country.

IU OPERA AND BALLET THEATER 2017-18 SEASON AT A GLANCE

All performances will begin at 7:30 p.m. unless noted otherwise, with an informational talk at 6:30 p.m. on the mezzanine level of the Musical Arts Center.