Secretary of the National Security and Defense Council of Ukraine Declared Preparation for the “Offensive” of Russia
State, 26.02.2020, 08:35 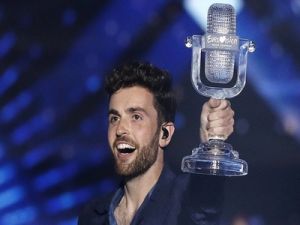 OREANDA-NEWS. The European Broadcasting Union (EMU) has decided not to cancel Duncan Lawrence's victory at the Eurovision Song Contest 2019. This representative of EMU David Goodman told the Russian media on Sunday. “No, this is not true,” he said, answering the relevant question. Goodman explained that the video of the song “Arcade”, performed by Lawrence, “did not give him an advantage”, it was published on social networks in 2017, but did not give him any advantage. For this reason, the council didn't find any reason to ban this song, and it was allowed to participate.

“The EMU was aware of the fact that the song Arcade was performed on Duncan Lawrence this year, representing the Netherlands, was published on YouTube in 2017,” the official representative said. “The EMU would like to clarify that this was not the official release of the song, and up to the last of time, this video of the song was only seen by a few hundred spectators, until then it became known before the competition".

The representative of the Netherlands Duncan Lawrence with the song Arcade won the contest "Eurovision-2019", held in Tel Aviv. In the final, he received 492 points. The second place was taken by the participant from Italy Mahmood with 465 points. Russian participant Sergey Lazarev with the composition Scream ("Scream") took the third place according to the results of voting by TV viewers and a professional jury, he scored 369 points.

Duncan Lawrence was the undisputed favorite of the bookmakers throughout the competition. They estimated the probability of his victory at more than 40%. There were no special effects in Lawrence's competition room. The artist performed the song while sitting at the piano. In the final of the competition, representatives from 26 countries met. The winner was determined by the sum of points from the TV viewers and the professional jury of the participating countries. The Netherlands won the Eurovision contest for the fifth time and for the first time in 44 years.