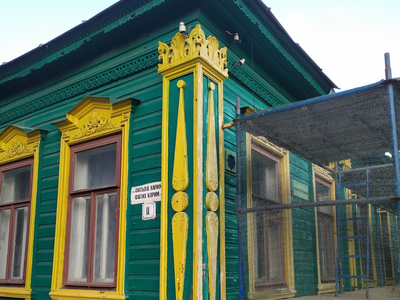 This house belongs to the cultural heritage sites of municipal importance. The building was built at the end of the 19th century, it is an example of wooden urban architecture. Last year, a fundraiser was announced for the reconstruction of decorative elements on the roof and facade of the building; 1.3 million rubles were required for this purpose.

It is planned that the house will acquire its historical appearance: the facade will be painted in blue tones, and a decorative attic will be returned to the roof. Festival volunteers during the restoration work will cooperate with experts in design and production.

As the assistant to the President of the Republic of Tatarstan Olesya Baltusova noted, the Berkutov House is an adornment of the Old Tatar settlement thanks to its complex and rich decor. She also stressed that both the residents and their neighbors are helping to restore the object. Anyone can join the festival activists.
Source: OREANDA-NEWS
Поделиться в соцсетях:
Подписаться на наши группы: Instagram | VK | Facebook | Twitter
Rate this article: