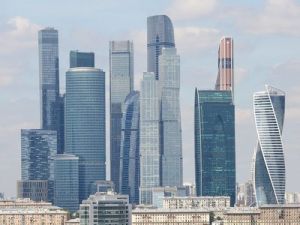 OREANDA-NEWS. A high-rise building of 79 floors was commissioned on the territory of the Moscow City business center in the capital. This was reported on Friday by the press service of Moscow State Construction Supervision.

"Permission was issued to commission a 79-story skyscraper on the territory of the Moscow-City Moscow International Business Center. The object is located on Krasnopresnenskaya embankment. The skyscraper was built as part of the Neva Towers multifunctional administrative and business complex, which consists of two towers 68 and 79 floors high", the message said.

It's specified that the two towers are connected by a four-story stylobate and a four-story underground part. The area of ​​the complex is almost 360 thousand square meters, height - 345 meters. Offices and apartments will be placed in skyscrapers. It's planned to create more than 2 thousand parking spaces. The press service added that today monolithic work is being completed on the construction of the second tower, it's planned to complete its construction in December 2020.