OREANDA-NEWS. Output from Turkish power plants that use imported coal reached an all-time high of yesterday, as the units made up for lower wind and hydropower generation.

Power output from plants that use imported coal hit just under 137GWh yesterday, implying a 94pc capacity utilisation rate for these units, which had a combined installed capacity of 6.1GW by the end of March.

Plants that burn imported coal have undergone a swift recovery from nine-month lows in March, when utilities shut some 1.8GW of capacity for scheduled maintenance. These closures continued until the end of last month.

The return of these units combined with lower renewable power output to unpin gains in coal burn. Wind power output averaged 14.9 GWh/d on 7-10 May, 58pc lower than a week earlier. Hydropower output, while marginally higher than a week earlier, was 2pc down compared with two weeks earlier at 214.3 GWh/d. Hydropower output received support from higher snowmelt during the middle of last month, reaching its highest level in a year at 266.4GWh on 16 April. But it declined by 31pc from the peak to just 184.2GWh by 1 May.

Yesterday's coal burn was equivalent to some 50,000t of 6,000 kcal/kg coal, assuming plants have an efficiency of 38pc. 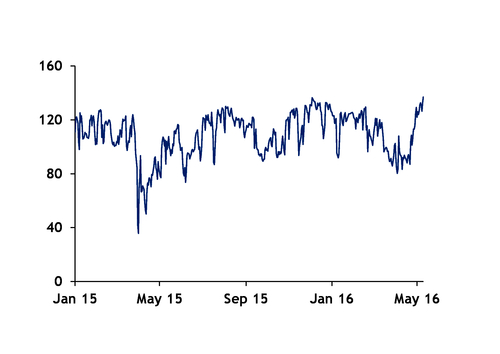